Gardening on a shoestring

Perhaps you've noticed that we've been sprucing up the tree pits along Fordwych and St Cuthbert's Roads the past two weekends, including putting out more planted up shoes for everyone to enjoy. 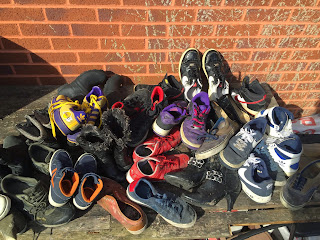 All the shoes we use are 'recycled' old shoes, either donated or abandoned in our neighbourhood. 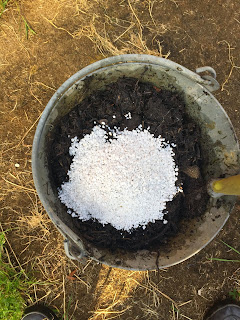 We mix up soil, free compost we collect from the Eco Hub in King's Cross
(that's what becomes of the garden and kitchen waste you recycle every week),
and perlite to help with aeration and water retention and soak thoroughly with rain water. 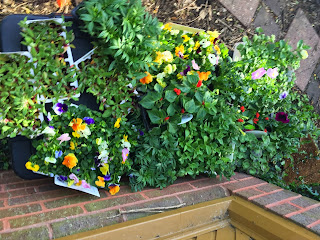 Then we find a good selection of colourful plants that will do well in the shoes, either ones we've raised in our greenhouse or good ones on sale at nearby shops (and  don't forget to check out places like Sainsbury's and Aldi's as well as garden centres for good buys) 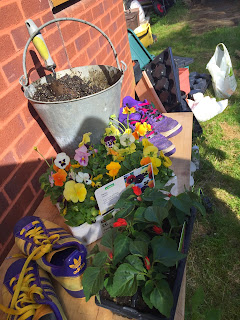 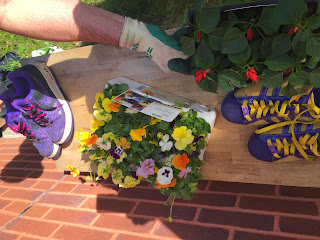 Now for the fun part, time to start planting up the shoes. 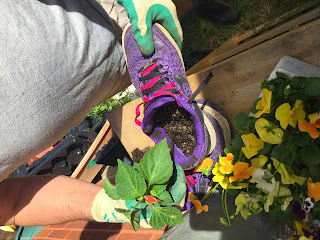 Fill the shoes with the soil and compost mixture, add the plant, press it into the soil and top up with a bit more and give it another drink. 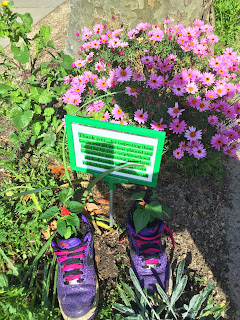 Looking very good indeed! Enjoy them as you pass by -
they're guaranteed to put a smile on your face :)


There are 60 tree pits that Garden Friends NW2 look after on Fordwych Road between Maygrove and Mill Lane and St Cuthbert's Road. We've got most of them planted up with shoes, but we still need 26 more pairs of old shoes or boots to complete the job. If you're in the mood to clear out your closet and run across some old shoes suitable for planting, just put them near the notice board at St Cuthbert's Church and we'll happily plant them up and put them in the remaining tree pits for all to enjoy.

Please, please come by St Cuthbert's for a gardening session on Saturday afternoon 18th April from 2pm onwards to about 4pm or so.

Lots of (fun) work to be done in our raised beds (to get them to look a bit like these ones).

And lots of (fun) work to be done in the tree pits (to get them to look a bit like these ones). 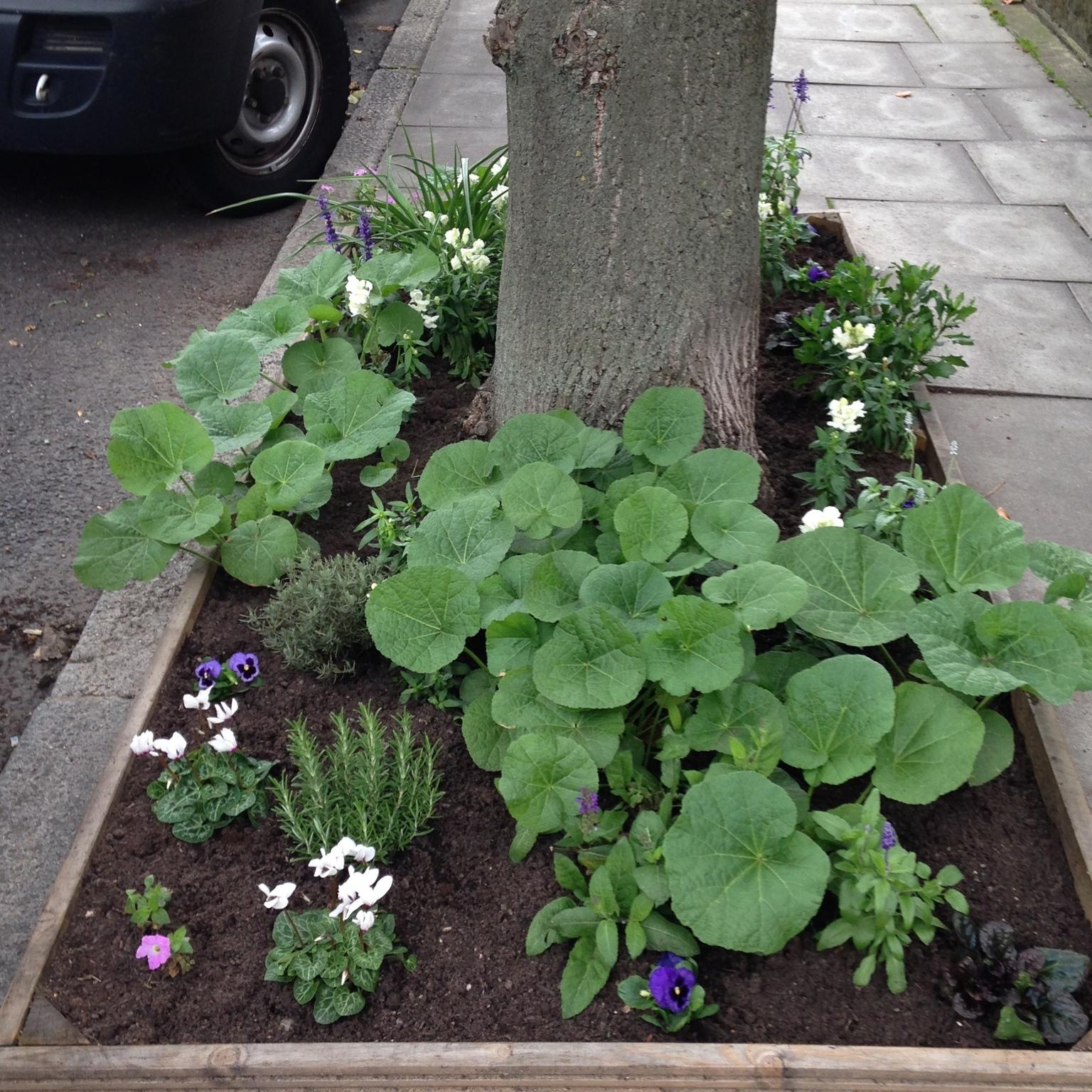 Hope to see all interested, curious and eager NW2 gardening volunteers at St Cuthbert's on Fordwych Road this Saturday afternoon for some communal gardening fun in the sun!

Posted by Garden Friends NW2 at 06:30 No comments:

Spring's just around the corner, so it's time for Garden Friends to awaken from our winter's semi-hibernation and get back to some fun gardening!

And what better way to kick off the spring gardening season than with a session on pruning roses, personally conducted by our resident roseologist, Clare. We have ten different varieties of David Austin Old English roses planted up in large oak cask barrels in the church garden that blossomed in their very first year last year, so we're optimistic that with proper care, they'll do even better this season.

Clare will cheerfully conduct the session on the care and feeding of roses, with practical skills focused on pruning. All are welcome, and no prior knowledge is necessary, so do come along. Bring any secateurs or pruning sheers you may have, though we do have some to use on site as well. The roses are all situated on a grass lawn, but you might want to wear wellies depending on the weather, and any other gardening in and around the raised beds and/or tree pits that may also pop up on the day.

The gardening will commence at 1:30 till 3:30pm on Saturday, 7th March at the church garden at St Cuthbert's Church located at the intersection of Fordwych Road and St Cuthbert's Road.

The roses say 'thank you' and they'll return the favour all summer and autumn with beautiful and fragrant blooms for you to enjoy and know you 'had a hand' in it all. Mmmm, you can almost smell them now!

Hope to see you there!

Keep calm and carry on pruning!
Posted by Garden Friends NW2 at 11:38 No comments:

Let's lend a neighbourly hand to our friends at Minster Road Nature Reserve for their Planting Day!

Camden Council is addressing this problem with public education, fines, and now a bit of lateral thinking. Sally Gimson, Camden's environmental boss, said the pink paint, which is really non-toxic chalk spray, was being used to warn pedestrians and "send a message to those responsible that their actions are being noticed by others."


Camden is the first London borough to adopt the abandoned dog poo spray painting scheme which has been piloted successfully in other places around the country, such as in West Dunbartonshire, where the practice has dramatically and positively changed dog owner behaviour. 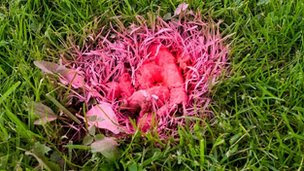 And according to Cllr Phil Jones, "We all love Camden and we want to keep our borough clean. That’s why we’re taking a tougher approach to litter, fly-tipping and dog fouling, which are not only disgusting and anti-social, they are also illegal. We know clean streets matter, and it is a small
number of people who are behaving badly and having a big effect on everyone. We want to change
offender behaviour through enforcement as well as education, so that we can all enjoy cleaner streets and not have to spend more money than is necessary keeping our borough clean.

We have set up a new education and enforcement team to increase the action being taken to tackle
these issues. We will stop and catch offenders in their tracks, educate the community on the correct ways to get rid of waste, and teach our youngest residents about the perils of enviro-crime. 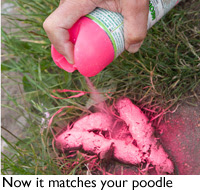 We’re also calling on residents to help us crack down on offenders. We would like your help and
intelligence identifying local enviro-crime hotspots or offenders so we can target our work. If you do
know anything report it to us, and we will use this alongside our own evidence to take action. Anyone caught committing an offence will be issued with an £80 fixed penalty notice, and fly-tippers face being prosecuted and fined up to £20,000."

Cllr Jones added, "We need as much information as possible to tackle these issues. Please report online at www.camden.gov.uk/cleancamden or call 020 7974 4444. You can remain anonymous. Thank you for helping to keep Camden clean."


The Fordwych Road/St Cuthberts Road area has been recognised as an habitual area for illegal dog fouling, dumping and fly-tipping by the Camden Council. So irresponsible dog owners and walkers, take notice of your pink sprayed mess and make a new year's resolution to clean up after your pets, bag it, and bin it, please! Nine out of ten dog owners, the ones who look after their dogs and their environment, act with care and consideration. So thanks so much for that, and let's all try to get the minority offenders on board.

Garden Friends NW2 urges you to support the current FRA petition to install a SAFE pedestrian crossing at the intersection of St Cuthberts Road and Shoot Up Hill.

Brent Council is on one side of this busy A road linking Kilburn and Cricklewood, and Camden is on the other, so real coordination will be needed to get the job done. Kudos to the Fordwych Road Association (FRA) for their concerted efforts to educate both councils about the need for a SAFE crossing on Shoot Up Hill, especially around the two bus stops at St Cuthberts Road.

Garden Friends NW2 maintains tree pit gardens the length of St Cuthberts Road, as well as being residents along these busy streets, so we know full well and first hand how much this pedestrian crossing is needed.

Please sign this petition today and pass on to others to help make our neighbourhood and community safer for all.

Keep calm and carry on gardening and crossing safely!
Posted by Garden Friends NW2 at 07:41 No comments:

Garden Friends NW2 is all about gardening and sense of community in our neighbourhood. So to this end we have happily supported the inauguration of a community concert series to be held at the wonderfully situated and acoustically superb St Cuthbert's church. 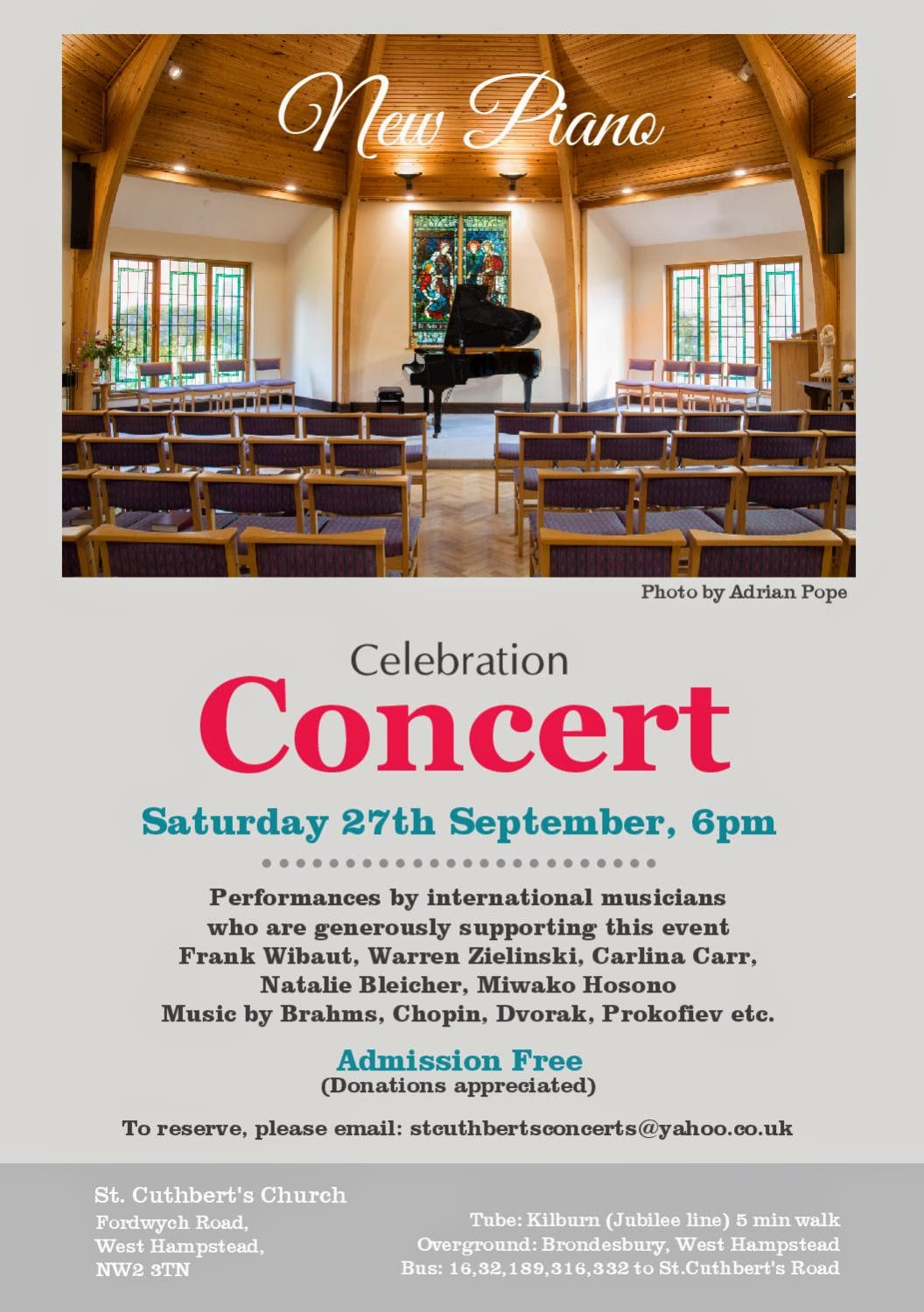 The first concert was successfully held on 27th September and drew a capacity crowd of over 130 appreciative people from our neighbourhood and beyond.

Garden Friends also had at attractive and informative table display during the interval that attracted a lot of interest and some additional subscriptions as well! 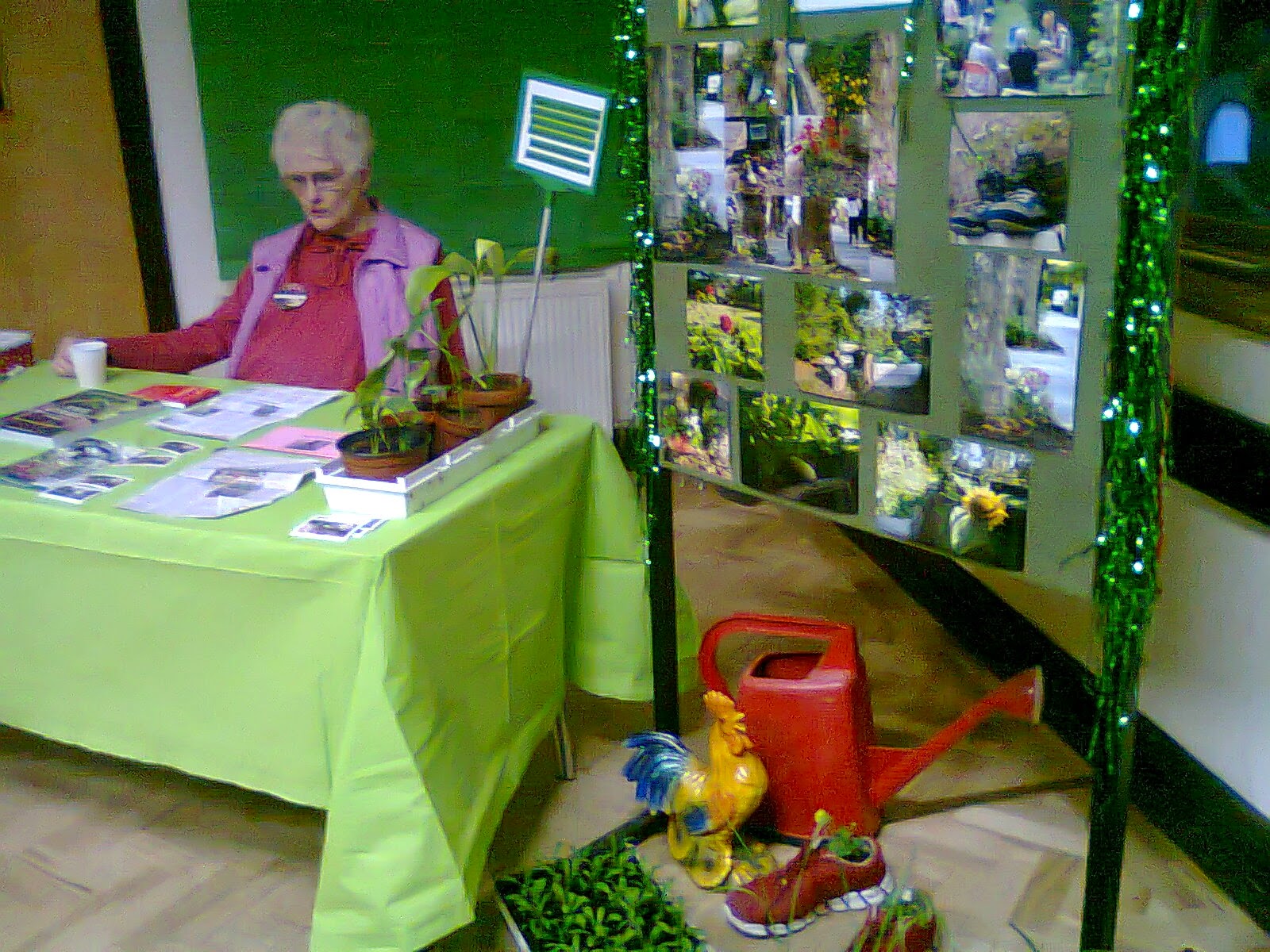 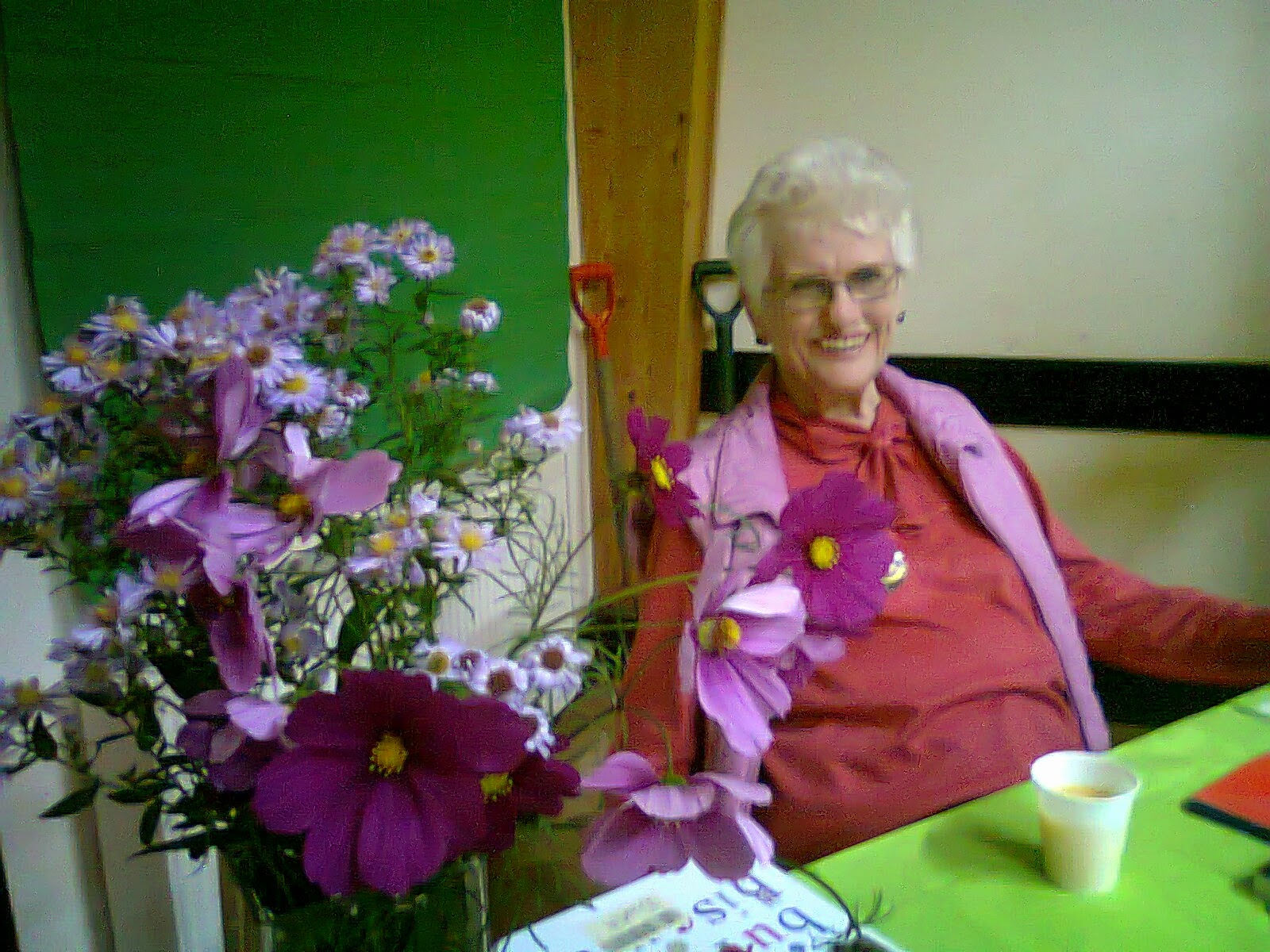 In fact, the wonderful grand piano newly acquired by St Cuthbert's to support the concert series came about because of the informal conversations occurring around the tree pit gardens between neighbours with common interests in community-building activities. You just never know who your neighbours are and how nice they are as well until you get a chance to talk to them!

Garden Friends will let you know when our next FREE community concert at St Cuthbert's is going to be held here on our blog.

Keep calm and carry on gardening and concerting to enrich and enliven our neighbourhood!

Posted by Garden Friends NW2 at 11:17 No comments:

Garden Friends NW2
Welcome to the home for the Garden Friends NW2. We are group of local residents who like to garden together and are interested in greening Fordwych Road and developing the garden at St Cuthbert's Church for community members who wish to join Garden Friends NW2 as well. We'll post details of our meetings here and ideas and suggestions from the group as we go along. You may have seen the lovely planting that is being done around many of the trees along Fordwych Road by Garden Friends NW2 and neighbours - we are planning to develop this further and are encouraging people to "adopt a tree" all along the road to "green up and clean up" our neighbourhood for everyone's benefit. There are a number of other projects and initiatives planned or underway as well, so feel free to enjoy our blog and join in! Keep calm and carry on gardening!